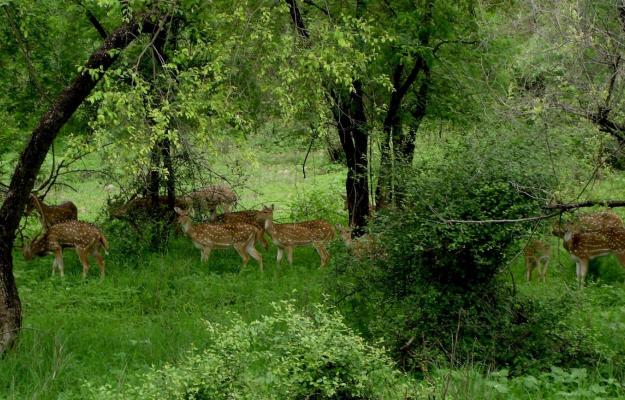 Evidence from the excavations at Mohanjodaro and Harappa indicates that during those ancient times, some of the present desert areas of Rajasthan were well wooded. But obviously the use of forests for firewood and other domestic purposes increased beyond their recuperative powers.

It was only in the beginning of the 20th century that the need for forest conservancy was realised and some of the rulers of these princely states reserved remnant areas as their Shikargahs. About ninety years back Jodhpur got a working scheme written for the management of its forests. Udaipur forests had a working scheme drafted 45 years back.

The present State of Rajasthan has been constituted by integrating a number of extensive princely states of what was previously known as Rajputana region mainly Jaipur, Jodhpur, Udaipur, Bharatpur, Kota, Bikaner and Jaisalmer.

Subsequent to the establishment of a unified Forest Department in 1951, the forests have been brought under regular scientific management. The demarcation and settlement of Forest boundaries almost completed. Almost all forest blocks have been notified under Rajasthan Forest Act 1953. With the abolition of Zamindari in 1960 of the Jagir and Zamin forests also came under the control of Rajasthn Forest Department. All forest divisions have regular working plans to carry out the scientific management of the forests. Extensive afforestation schemes have been undertaken in order to reduce arid conditions of the State as well as to check the process of desertification.

The forests of Rajasthan cover an area of 32,638.74 sq km which is 9.54% of the total geographical area of the state. They are spread unequally in northern, southern, eastern and south-eastern parts. The state has teak forests, which is northern most limit of teak zone in India. The forests are mostly edapho-climatic climax forests.

The forests of the state not only partially meet fuelwood and fodder demand of the rural people but also contribute Rs.7160 million to the state domestic product (SDP).

Forest Status Reports, based on Satellite imagery Survey conducted by Forest Survey of India after every two years, has shown a definite increase of 3478 square kilometers area under tree cover between 1987 and 2001 in Rajasthan state. Rajasthan is one of the three states where there has been continuous increase in area under tree cover in these status reports. This is the result of the organised and successful afforestation efforts of the department despite harsh climatic conditions and heavy biotic pressures on the forests in the state.

The extent of Natural forests in Rajasthan is not only one of the lowest in the country but also in terms of productivity of forest, it is the lowest. On the contrary The State is endowed with the largest chunk of wasteland which is about 20% of the total wastelands of the country.

Keeping in view the National Forest Policy and the State Policy on forests in order to achieve the desired forest cover, the state has twin objectives of conserving the forest areas through effective forest protection and simultaneously embark upon an ambitious afforestation Programme with a conscious approach in adopting clear development strategies.

Afforestation in new areas and reforestation on areas which had lost is vegetal cover, both are very stupendous task looking to the adverse edapho climatic conditions prevailing in most part of the State coupled with serious biotic presses and existing socio-cultural constraints. Edaphoclimatic constraints do affect the productively and therefore to enhance productively a should approach in technology management is essential.

But to diffuse the anthropogenic pressures on forest, judicious management strategies are to be adopted involving, local people for long-term sustainability.

In order to implement such gigantic task the human racecourse development and capacity building need to be undertaken in a strategic manner keeping in view the paradigm change.

Forestry research needs to be strengthened towards desired goals of higher productivity, technology improvement and cost effectiveness in forestry practices.